The S&P 500 Index crossed 3,000 for the first time ever this July as investors cheered comments by Fed Chairman Powell, “The U.S. is suffering from a bout of uncertainty caused by trade tensions and weak global growth.” He pledged to do whatever it takes to shore up the economy which he did on July 31st by lowering the Fed funds rate by 0.25% and ending the run-off of the balance sheet. In essence, the Fed admitted that it was too aggressive with rate hikes last year.

The day after the Fed’s rate cut, President Trump announced 10% tariffs on $300 billion of Chinese goods, to begin in September. This caused the market to drop over 600 points and experience its worst week in 2019. Stocks have tended to sell-off after previous tariff announcements.

The latest round of tariffs is being used to get more concessions from China on things like currency manipulation, intellectual property theft & forced technology transfers and to force the Fed to keep easing. These new tariffs mostly affect consumer goods. Retail stocks were hard-hit by the announcement. It will be interesting to see if these tariffs are passed on to the consumer or if companies will eat the higher costs.

Due to share buybacks and merger & acquisitions, 9% of the total value of stocks are being eliminated in just this year alone! That makes stocks scarcer and thus more valuable – providing an incentive to own stocks in this extremely low interest rate environment. When you consider the new lower corporate tax rate (21% down from 34%) corporations have more free cash flow to buyback stocks, raise dividends, and make even more acquisitions. If these trends continue, one-third of stocks will be retired over the next few years. That’s a major reason why investors should stay invested!

Home values have nearly doubled over the last seven years in some of the hotter markets (Seattle, CA bay area, and Los Angeles) but have turned down for the first time since 2012. Existing home sales fell 1.7% to a seasonally adjusted 5.27 million – which is the 16th consecutive month of declining sales. There are many questions as to why the housing market isn’t doing better in such a strong economy – borrowing costs are low, wages are rising, and unemployment is at a 50-year low. However, with prices rising so sharply the last few years, many potential home owners just can’t afford these inflated home prices and just don’t have enough capital saved up to make the down-payment and cover ongoing maintenance costs.

Also, hurting the market is the $10,000 cap on the deduction for state and local taxes as well as limits on mortgage interest deductions. Consequently, we may be in the throes of a protracted slow-down.

With $14 trillion of negative yielding bonds around the world, our Treasuries are attractive. That combined with a stronger dollar has pushed interest rates significantly lower. Just last November, the 10-year Treasury was yielding 3.2%, but they dropped to 1.864% in early August – their lowest level since November 2016. With two more Fed rate cuts expected (September & December), we would expect interest rates to head lower. For these reasons, we continue to recommend home owners with relatively high fixed mortgage rates should consider refinancing.

Government spending just keeps on rising. This year, our budget deficit will top $1 trillion, and the total national debt is now over $22 trillion. So why hasn’t inflation taken off? It’s because demographics, productivity gains, and particularly the power of technology (I like to call it the Amazon affect) have led to deflationary conditions, that have kept prices low and inflation benign. These forces won’t change quickly, and for those reasons, we believe interest rates will also stay low for longer.

For most investors, rising dividend stocks should represent a cornerstone of your portfolio. Rising dividends are important because they not only provide a growing stream of income but are also a sign of a company’s profitability as well as management’s confidence in the future.

One of the areas that remains very attractive are value stocks. These are companies that trade at a significant discount to their intrinsic value. Value stocks have been neglected for years as high-profile growth stocks have dominated the headlines and disrupted old industries. The two staple of value stock sectors – banks and energy companies appear poised for a break-out.  Some speculate that value might be dead… However, when the market declares something dead, it’s probably the best time to buy it!

After months of anticipation, the Fed has finally cut interest rates. However, new tariffs imposed by President Trump has caused another sell-off… Interest rates are falling around the world (Race to Zero) and we expect further declines in the months to come. This should help stocks in the long-run, particularly dividend paying stocks. It is getting harder for fixed income to compete against stocks especially when 10-year Treasuries are paying only 1.864%. 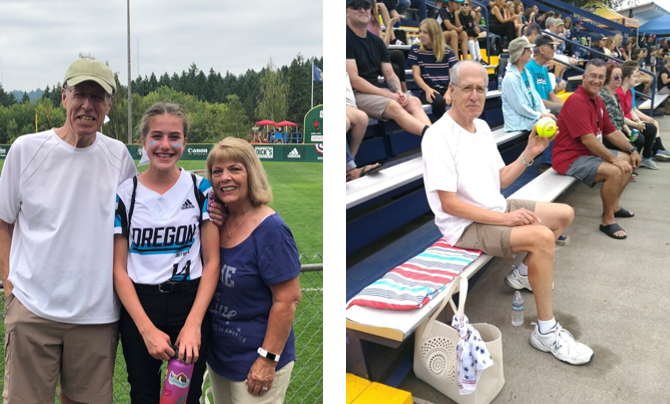 Doug attended the girls Softball World Series championship where he watched his 12 year old niece play. Doug’s comment about catching the foul ball: “when I realized the ball was coming toward me, I was panicked that I would drop the ball in front of the crowd!” Lucky for Doug, he caught it!