The S&P 500 Index fell 6.6% in May, following the news that trade tensions between China and the U.S. have escalated. In May, it looked like a trade deal with China was close at hand, but now that seems to be further down the road. We believe President Trump will cut a deal with China, since the state of the economy will be important for his re-election hopes.

Thankfully, sidelined cash is sitting at record levels and could provide a catalyst for stocks if we get a trade deal with China or if the Fed cuts interest rates in the coming months. Stock valuations are still reasonable (16x forward earnings), and sentiment remains very negative (investors pulled $44.2 billion out of the stock market in May). And with interest rates so low, stocks continue to look attractive compared to their bond counterparts.

The U.S. economy is now officially in the longest growth streak on a sustained basis in U.S. history!

Something to watch over the coming months will be the state of the global economy, which is slowing down. Several regions around the world are already in recession – parts of South America, Asia, Africa, and Europe. In addition, China’s growth is slowing.

Here in the U.S., copper prices (a proxy for manufacturing) are down 8.9% in the last month, and West Texas crude is down 20% in just the last few weeks. These are leading indicators of slowing growth.

The Atlanta Fed is projecting 2nd quarter GDP growth of just 1.4% after we grew 3.1% in the first quarter of 2019. With the global economy slowing and the Atlanta Fed indicating second quarter GDP of only 1.4%, the Fed is expected to act soon on cutting interest rates.

We believe that the Fed should cut rates one-quarter point now and another quarter point sometime later this year. However, because the President criticized the Fed early this year, they may be hesitant to cut rates, since it would make them look like they yielded to the President.

If the Fed doesn’t cut rates, we expect that GDP growth estimates for 2019 will be lowered to the 2% range.

The House of Representatives overwhelmingly approved legislation (417- 3) to relax the rules on mandatory IRA distributions at age 70 ½. The law delays the age of mandatory distribution to 72, and the Senate version is considering raising the required age to start distributions to 75.

In addition, under the proposed change, retirees will also be able to contribute to their IRAs for longer. Currently, retirement savers must stop contributing to their IRAs at age 70 ½, but the new law would allow contributions beyond age 70 ½.

This bill has broad bipartisan support, but the details are still undecided, and it still must be passed by the Senate and signed by the President before becoming law.

We are very excited about these potential changes, as it provides retirees more time to save before mandated withdrawals from IRAs begin. Stay tuned!

While it may be difficult to cash in and reduce your allocation to stocks when times are good, the disciplined reduction to stocks in your portfolio should prove wise, when the next recession and stock market downturn arrives.

According to asset manager GMO, as reported in Barron‘s on 5/20/19, value stocks have traded at an average discount of 24% vs. the broad market in recent decades. But now they are trading at a discount of 31%, making this out of favor area a particular good bargain at this time.

Stocks dropped sharply in May following the news that trade tensions escalated between China and the U.S. But when it became apparent that the Fed may cut interest rates in the coming months, the stock market took off again and is now very close to its all-time highs.

In the face of a slowing economy around the world, growth in the U.S. continues, despite signs of a slowdown on the horizon. 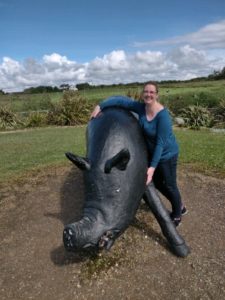 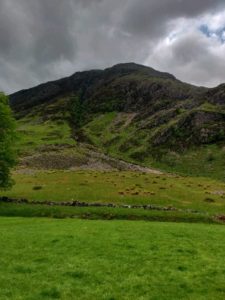 I recently returned from an incredible trip to Scotland and Ireland. I spent a couple of days wandering Edinburgh, taking in the sights and marveling at the juxtaposition of the old and new. Then I joined a group of the friendliest people on a three-day tour of the Isle of Skye. We were subject to the tour guide’s “adventure” – this (unbeknownst to us passengers) meant three days of hiking the hills of the Highlands and exploring the verdant glens of Scotland. We got our workouts in each day and delighted in scrumptious food along the way.

After nearly a week of adventure in Scotland, I headed off for some R&R in Ireland. I stayed with my aunt and uncle on the west coast of the island (right on the beach!). I made the mistake of taking them up on their offer to take a walk on the beach…according to my map tracker, it was a whopping 6 miles. Some walk! Their pup Riley was up for more but was content to stay with the humans back at the cottage. We took a tour down the coast and took in the sights (meaning we climbed the cliffs to get the best views).

Although I am happy to be home with Mia, I would go back in a heartbeat. The planning of another trip next year will begin soon…who knows where I’ll go next!