The S&P 500 Index has rallied over 18% since Christmas Eve and is within 5% of the previous highs reached in 2018. Fear has substantially subsided as the Fed has put a hold on rate hikes and is rethinking balance sheet reductions.

The stock market seems to be consolidating recent gains and marking time until earnings are released in April. If Chinese trade negotiations lead to some sort of a deal, we would expect the stock market to rally further.

Trade negotiations between the U.S. and China appear to be advancing in the right direction (more on this below), and corporate earnings are coming in better than expected.

However, February non-farm payrolls grew by only 20,000, well below estimates of 180,000. But these numbers may have been distorted by the partial government shutdown in January and harsh winter weather.

The housing sector remains weak, December retail sales disappointed, and soft data was reported from the purchasing manufacturers – all signs that the economy is beginning to show signs of deceleration.

Outside of the United States, the ECB lowered their Euro GDP estimates from 1.7% to 1.1% for 2019. In addition, they announced plans for additional stimulus – signaling increased concerns about the slowdown across the Euro region. Factory orders in Germany were down 3.9% and Italy appears to be in a recession.

China’s export numbers were soft – February exports plunged 20.7% and imports fell 5.2%. While the slowdown in China is troubling, it also indicates how important a trade deal is to China.

If there is a trade deal with China later in March or early April, we expect the stock market to rally further to the upside, as it would remove a significant negative overhang that the stock market has been dealing with for over a year. A trade agreement would be an immediate boost to both Chinese & U.S. economies as well as those around the world, which in turn could free up companies to make new investments and hire workers, and potentially reverse some of those deceleration measures mentioned above.

A perennial favorite of ours here at True North, dividend stocks are often a safe-haven in choppy markets. Companies who consistently raise their dividends year after year have tended to outperform over the long-haul, compared to growth stocks and non-dividend payers.

Increasing dividend stocks provide a growing stream of income, and current yields that in many cases exceed comparable treasury bonds.

International stocks appear to be at bargain prices right now. Europe was particularly hard-hit last year and may now be poised for a nice rally.

Value stocks also have been out of favor, and they tend to do better in a slowing economy. Value stocks are companies that trade at discounts to their intrinsic value.

In recent years, growth stocks have outperformed value stocks with many investors chasing the high growth momentum stocks and big technology companies. This has left many value stocks unloved in the trash heap.

Moreover, in the 90 years from 1926-2016, value stocks outperformed growth – 13.5% annually vs. 9.2%. That’s significant long-term outperformance and a good reason to consider value investing!

Bonds look more attractive in 2019 as a reliable source of income for investors.

Thus, we believe there is more opportunity and reduced risk in intermediate-term bonds extending to 7 years. We have been gradually extending bond maturities, where appropriate, to the 6 to 7-year range to take advantage higher rates and a more patient Fed policy.

Money markets are now paying more attractive yields of around 2%. We still favor cash holdings of 2-10% of client portfolios to protect against the volatility of the markets while still earning income.

Stocks have had their best start to a new year since 1987 – in part because the Fed has put rate hikes on hold and because a trade deal with China seems likely. In the weeks to come, we expect the stock market to resume its upward march to the old highs as first quarter earnings are announced. If that happens, don’t pop champagne corks, instead look to reduce your allocation to stocks. 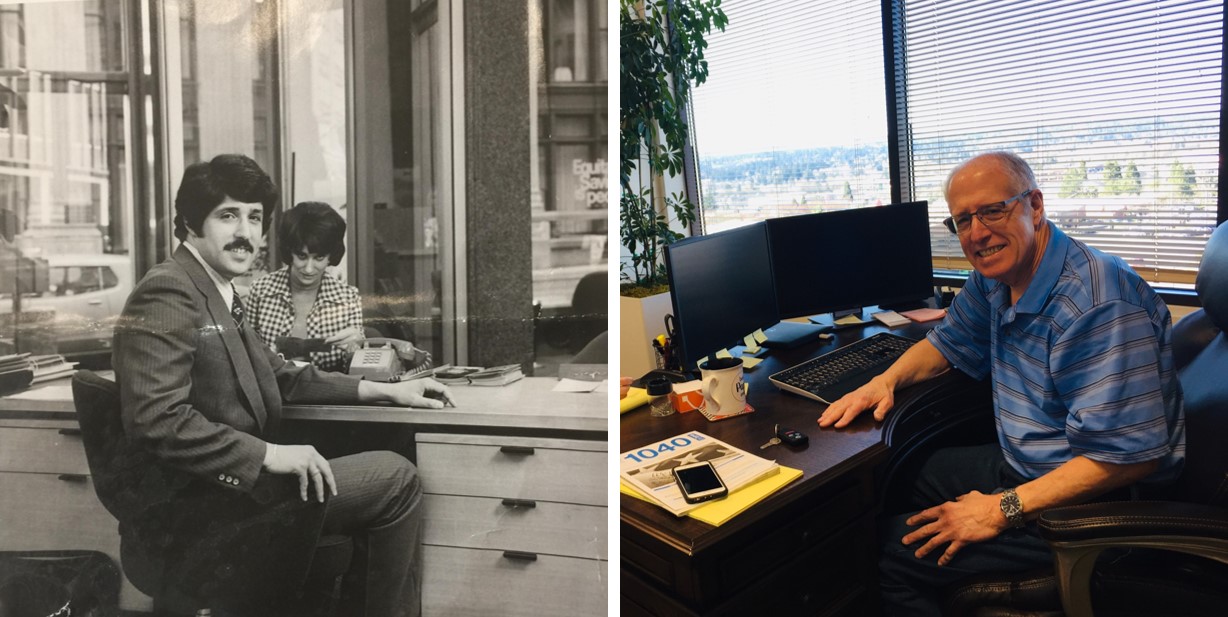 A little shout out to our Doug Micciche this month, over 45 years in the business! The hairstyle might have changed… just a little, but that warm, heartfelt smile that greets us in the office each week, hasn’t!

When asked what he finds to be the most rewarding part of his job, he answered “helping clients achieve their retirement goals and casual Fridays!”