Many investors look at the difference in making charitable contributions from their IRAs vs. regular donations to charity (i.e. writing a check) as a “six of one, half a dozen of the other” issue.

But that assumption is wrong! Every dollar you withdraw from your IRA is included in your adjusted gross income for the year.

One way to avoid reporting higher income and potentially higher taxes is to send your RMDs directly to charity.

What are Qualified Charitable Distributions (QCDs)?

According to the IRS, a Qualified Charitable Distribution (QCD) “is an otherwise taxable distribution from an IRA (other than an ongoing SEP or SIMPLE IRA) owned by an individual who is age 70½ or over, that is paid directly from the IRA to a qualified charity.”

When you set this up correctly, you will be able to keep those RMDs out of your taxable income for the year and you won’t be taxed on those distributions either – it’s a pretty genius strategy.

Yet, we find that many IRA account owners who are subject to RMDs aren’t taking advantage of this powerful tax strategy.

I think it’s because there is a lack of knowledge of the strategy and its benefits among a lot of different types of investors:

All are all missing out on the potential tax savings of this powerful strategy.

The Most Important Benefit of the QCD

Here is the most important point of this entire blog post: Every dollar that comes out of your IRA and goes directly to charity in the form of a QCD, is excluded from your adjusted gross income (AGI).

Lowering your AGI can have a tremendous ripple effect on your tax situation, and impact the following:

Making QCDs, instead of donating directly to a charity, is a great way to try to minimize your income.

Before we jump in to the case study below, I want to clarify a few technical pieces of this rule:

To really illustrate what this strategy looks like in the real world, let’s look at a case study of 2 scenarios:

We’ll look at the tax implications of each scenario, so you can see how it really does matter where those contributions to charity come from. 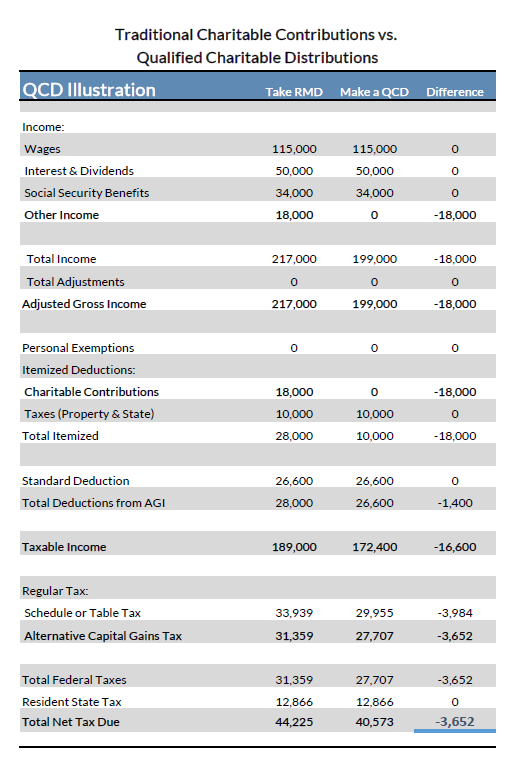 Right off the bat, you’ll notice that the scenarios in the case study begin to diverge with the “Other Income” category.  That’s because the IRA owner who took their RMD from their IRA as income needs to include this as part of their adjusted gross income.

The IRA owner who didn’t take the RMD, but gave it straight to charity instead, reports $0 for “Other Income” (shown in the middle column, for a lower AGI figure of $18,000.

In contrast, the IRA investor who donated her RMDs directly to charity via the QCD method, will take the standard deduction of $26,600, since her total itemized deductions didn’t exceed the standard amount.  Her deductions were only $10,000 for the year.

The IRA investor who took their RMD and wrote checks to charity, had a taxable income that was $16,600 higher than the investor who donated her RMDs directly to charity via a QCD.

>>> Tip: If you prefer to see and hear this case study explained, click here to watch the video!

Does a QCD Make Sense For You?

Like most investment and tax strategies, there is no blanket “this-works-for-everyone” right answer. Therefore, it is important to run the numbers for yourself to see if this strategy makes sense for you.  If you work with a professional tax advisor, ask them to run a comparison like the one used here.

Fortunately, I’m married to a brilliant CPA, so he provided this case study for me in just a few minutes using his tax software…I always knew that when we started dating back in 2003, one day, he would be able to provide me with a much needed side-by-side tax projection so I could better illustrate my point in this blog post.

If you haven’t already taken your RMD this year, you still have time to make a QCD instead – so don’t wait!

What If You Need The Income From Your IRA?

You may be hesitant to donate your RMDs to charity because you’re actually using your RMDs for income. But if you have taxable investment accounts, it might make sense to take income from non-IRA accounts instead.

Also, keep in mind that this isn’t an all-or-nothing strategy.  You could still withdraw your RMD like you normally do for a portion of your required distribution, and also contribute a portion to charity through the QCD strategy.

How Ready Are You For Retirement? Gauge your retirement readiness to make a plan for the future. Download our Retirement Success Forecaster and get FREE personalized results.